Medieval Musicians at the Fete in

Eymet.  The Three Musicians 'a la

Picasso' by J.Dodd. Acrylic on 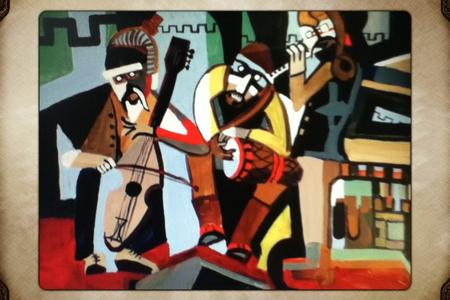 Touch on the photo to enlarge it - around and about Eymet

Beyond the village, the rolling countryside is a patchwork of vines, wheat fields and sunflowers, interspersed with wooded copses.   It is a wonderful area for walking and bicycling.  A walking guide of the area can be purchased at the Tourist Information Centre in the town square of Eymet for about 2 Euros.

The town of Bergerac, 25 km. North, has a lovely old town with fine examples of half-timbered medieval houses.  Within an hour's drive upstream from Bergerac, you will come to one of the most spectacular parts of the Dordogne River.  Fairy-tale castles, beautiful villages built into the faces of steep cliffs, and prehistoric caves characterize this area.  Villages like Beynac, La Roque Gageac, Domme and Sarlat are all must-see places along the route.  The towns are best explored on foot.  In the hot summer, consider renting canoes and drifting down the Dordogne.  You can also get aboard one of the larger boats, the "gabarres" to enjoy a guided tour.

Don't miss a visit to some of the prehistoric sites in the area where you can see rock paintings that date back to the last Ice Age.  Lascaux, Les Eyzies, Rouffignac, and the Grotte du Pech-Merle are all within an hour's drive of Eymet.

A medieval gem, the wine town of St-Emilion is an hour's drive to the northwest.  The city of Bordeaux and the many appellations of the Bordeaux wine region lie beyond St-Emilion. West of Eymet (two and a half hours' drive) are the sand beaches and dunes of the Atlantic Coast.  Four hours drive southwest will bring you to the Pyrenees and the Spanish border.

The area is also known for its gastronomic delights.  Foe gras, duck confit, cassoulet, walnut oil, truffles and a myriad of cheeses can be found in the markets and shops.

History buffs will find much of interest in the region.  One of the Routes de Compostella passes through the area.  The many castles along the Dordogne are peaceful places today, but their walls bear witness to the conflicts of the Hundred Years' War, when England and France once battled over control of this part of France.

There are many other bastide villages built along the same lines as Eymet within an hour's driving distance.  Definitely worth a visit are Monpazier, Beaumont, Cadouin and Belves.